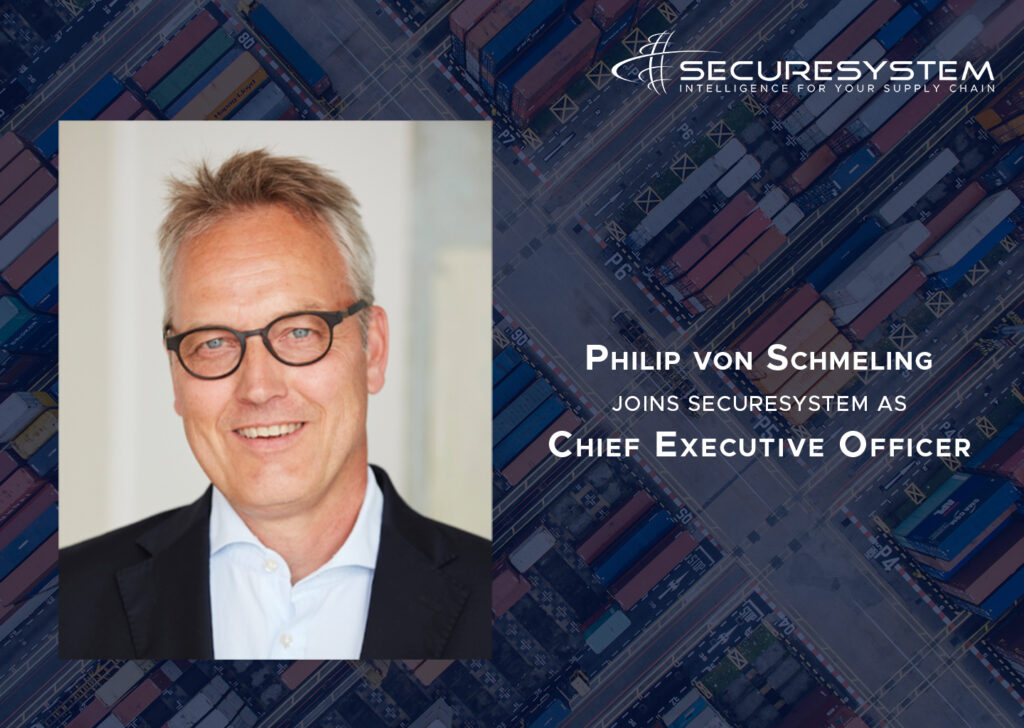 SecureSystem expands its leadership team. We are proud to announce the appointment of Philip von Schmeling as Chief Executive Officer at SecureSystem. Both the shareholders and the team value Philip’s experience in successful management of dynamic organizations and optimization of global, complex supply chains.

Philip von Schmeling has over twenty years of experience as a consultant, corporate manager, and entrepreneur. During his time at BCG in Munich and Los Angeles he worked in various industries, focusing mainly on strategy, process optimization and growth. After his time with BCG, he continued to work for his client Dole Food in Los Angeles and Costa Rica, at first assuming responsibility for the fresh fruit supply chain before becoming CFO of the North America division. Back in Germany, Philip joined the solar pioneer Conergy in 2006, initially as Head of Sourcing, tasked with setting up the company’s own PV module production. In 2007, he joined the Conergy board as CSO, at the time responsible for just over 1 bn Euro of sales. After Conergy, Philip supported a small PV developer in the successful implementation of several PV projects throughout Europe. In 2014, he joined PRESPARTNERS, a boutique consulting firm, focusing on transformation, restructuring, project and interim management. Since 2020, he has also been a member of the advisory board of the Inuwat AG, a German medium-sized company, active in automation and water treatment.

Philip holds an engineering diploma (TU Munich) and an MBA (INSEAD). He lives with his family in Hamburg.

The system also provides real-time global visibility of a container’s location, internal condition, and physical integrity. The industrial-grade IoT technology, developed and tested by Airbus® Defense and Space, uses environmental sensors, physical security sensors, satellite, and cellular communication as well as GPS positioning to transform containers into smart, interactive units, allowing comprehensive data analytics. The portable design of the device allows the hardware to be attached to or removed from any standard container in a matter of seconds. The generated insights are delivered through a cloud-based data intelligence platform.

Data protection notice for the download of a white paper

Description and scope of data processing

You have the option of registering to receive a whitepaper via our online form. In this case, the personal data of the sender, i.e. the user, transmitted with the request will be stored. In some cases, we use external service providers to process your data. These have been carefully selected and commissioned by us, are bound by our instructions and are regularly monitored.

The legal basis for the processing of this data, which is transmitted in the course of sending a request, is Art. 6 para. 1 lit. b) GDPR (Fulfilment of a Contract – in this case provision of content and follow-up content).
We will also use your mail addresses, which we have received in connection with the provision of the whitepaper, to inform you about our products, services and current developments, Art. 6 para. 1 sentence 1 lit. f GDPR in conjunction with. § 7 para.(3) Act against Unfair Competition (UWG). You may prohibit this promotional use at any time without incurring any costs other than the transmission costs according to the basic tariffs.

The processing of this personal data allows us to process the contact and to provide the requested whitepaper.

The user has the possibility to object to the data processing at any time. The objection should be sent to the following e-mail address: info@securesystem.de. Or by clicking unsubscribe when we send you information by e-mail. All personal data stored in the course of contacting us will be deleted in this case. All information on data protection can be found in our data protection information.