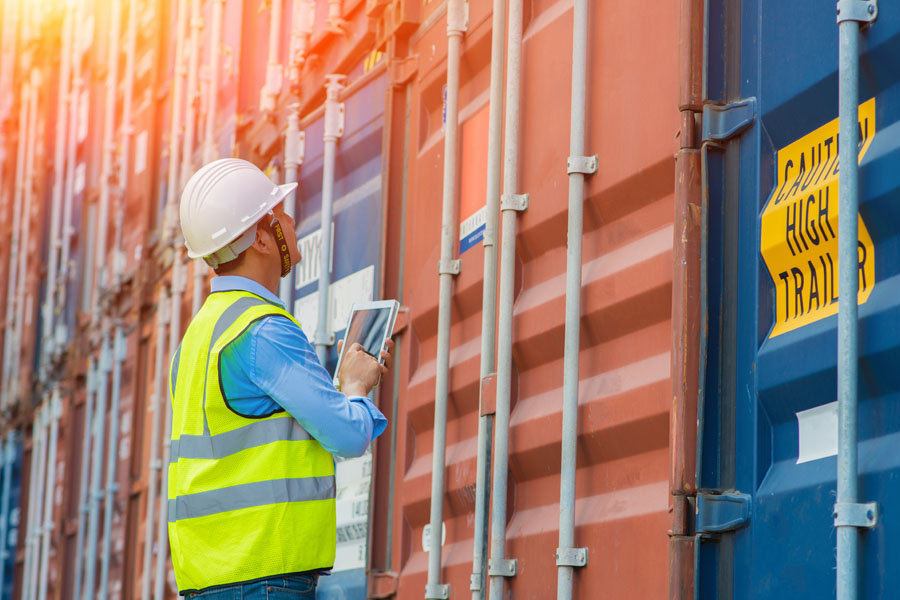 Published in the Bremen and Bremerhaven Chamber of Commerce Magazine, October 2019. English translation is below, original text can be found here.

Container traffic has been steadily increasing over the years, bringing with it a rise in damage occurrences across the industry. At the same time, supply chains remain plagued with delays, disruptions, and danger because of a lack of real-time, relevant data on cargo and container status. In-transit cargo becomes too hot or too cold, containers are opened illegally or stolen. Finding undeclared cargo in containers, illegal drugs for example, is also a problem.

Which area of the supply chain is to blame? Airbus Defence & Space originally developed and patented a mobile monitoring and security solution, which transmits the necessary data via satellite and GSM in real-time in a cloud-based infrastructure. SecureSystem adopted and refined this idea and a part of the Airbus technology to be ready for production. Founded in 2017, the company has locations in Bremen, Munich and the US, and continues to work closely with Airbus Defence & Space.

The industrial IoT-technology transforms standard shipping containers into “smart containers.” The container and cargo can be monitored and located on land, sea and on rail, thanks to a hardware-unit, which can be attached to a standard container door in seconds, various sensors, satellite and GSM connection, GPS tracking and a cloud-based security portal.

The main focus of attention is the integrity of cargo during transport. The sensor and tracking data are sent to the cloud-based SecureSystem-Trust-Center through a so-called “Heartbeat” and can be analyzed online. The “Heartbeat” is variable; it can be set based on the demands of the client, in particular based on the vulnerability and nature of the cargo. The monitoring of cargo is an important element of the supply chain, especially for temperature-sensitive and/or expensive cargo such as pharmaceuticals and electronics as well as mission-critical components (for example for automotive manufacturing).

Sensors indicate if something goes wrong

During cargo shipments, the temperature as well as the humidity inside the container can be measured. Should these parameters deviate from their set ranges, an alarm is automatically triggered. The parameters can be updated while the cargo is in transit. Data transfer occurs primarily through GSM. If GSM is unavailable, then the data are sent via satellite.

An alarm is also triggered if the door of the container incurs an unauthorized opening or the unit is detached from the door. Using the keypad, a PIN is entered to open the container without triggering an alarm. If a wall of the container is welded open, the light sensor detects this. Movements (for example of stowaways) are reported through the infrared sensor and trigger an alarm. The integrated shock sensor displays whether the container was improperly handled and/or fell down from a high height.

Additional sensors, which are attached directly to cargo for example, can be connected wirelessly with the unit via Bluetooth. Thus, a clear picture of the container and its cargo is achieved through many granular data points. In this way, sensors for CO2, for example, can be attached which trigger an alarm if there is a deviation from the set range. Through a BUS-port, tethered sensors can also be used.

The unit can quickly and easily be installed on a container. After the user inputs the randomly generated PIN, the system is activated, saving and sending data. This smart system allows the client to continuously monitor and check the integrity of his/her cargo. The battery is rechargeable and lasts for many months under normal usage.

The data are helpful especially in collaboration with public authorities (customs, border control) as well as insurers. They allow for a transparency which optimizes the supply chain and helps all stakeholders – i.e. cost reduction, fewer damages, quicker handling.

The American government for example has been using SecureSystem for some time in order to find out if containers were opened or manipulated during shipment. Another example: a client in South America managed to find out where drugs were added to a container shipment by using the SecureSystem unit. It was found that the container was properly loaded and locked in the warehouse but was opened on the way to the port on a diverted truck and loaded with drugs. Third example: a wine merchant encountered drastic customer complaints after several deliveries. The complaints held that the wine was inedible. It was found that the wine had turned. The color and consistency of the wine, however, did not seem to indicate that the wine had turned. The unit proved that during the transport of the wine the temperature of the container was strongly elevated for a long period of time. With these results, the wine merchant booked a different ship, which doesn’t traverse through the same warm region. Since then, there have been no more customer complaints.